Why did you choose Civil?

During your first two years of engineering, you complete a general program and then you choose if you want to do civil, manufacturing, mechanical, or electrical after that. I started taking a couple more of the civil-structural related courses, and I found that was what I was passionate about. Then when I got my job doing research during my undergrad and I got exposed to a few awesome projects involved with civil engineering. Moving forward throughout the next couple years, when I decided to do my Master’s degree and I was able to continue to do this research I really knew I was making an impact in the academic field of research, with the goal of  eventually working in the construction field. I hadn’t known from the start that I wanted to take civil, but those few things led me to where I am now and I couldn’t see myself in any other field.

How did you get involved with research?

There were a few steps within the process of what brought me into the research field. The first was when I attended Create on my first day of school and they took us on a tour throughout campus and we saw all the different labs and available research. At that time I hadn’t known that there was even a research program at the University. I remember we went into the high head lab, which is the large structural engineering lab, one of the graduate students there was discussing his research and how he designed his own concrete mix with waste glass. I thought that was neat; how someone could be so smart to be able to design with something like that. It piqued my interest, and as it turns out he was a former student of Professor Rteil. My second route towards research was through my second-year class ‘Theory of Structures’ with Dr. Rteil when he discussed his research topics at the beginning of class. It was very clear to me that that was the topic I was very interested in within engineering.

How did you start working with Dr. Rteil?

I was thinking about different work opportunities as an undergrad but didn’t know where to start, so I thought maybe research would be interesting to get involved with.  I wrote a resume and CV, I went to his office and I asked him if I could work for him in the lab, and he just shook my hand and said yes. He didn’t even take my resume, it was great, and it was a really easy process. His only thing, right from the very beginning, was ‘you got to be willing to get your hands dirty because it’s a very dirty lab’ and I’m like “let’s do it.” That summer, I started working in the lab and we started with few projects. 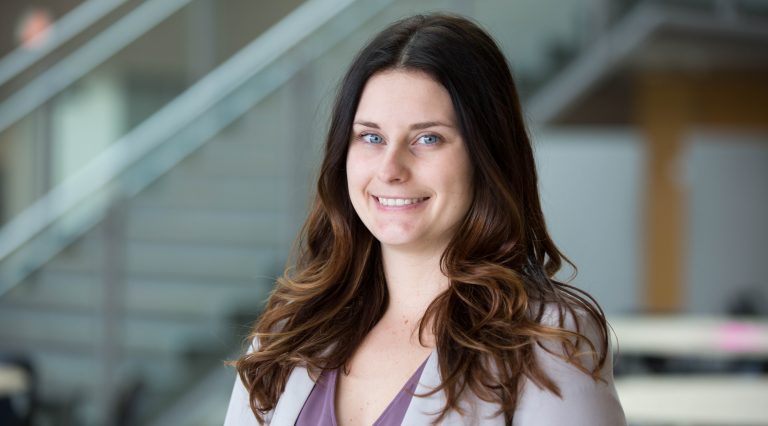 Why the interest in concrete?

When I first heard about concrete, it didn’t seem like a very interesting subject to get into. It wasn’t until I started doing research and making my own concrete mixes that I realized just how much potential that this material has. It is so versatile. It can be used for a lot of applications and there’s a lot of different materials you can put into it. It’s like baking a cake. You have all these ingredients; you have a recipe and process to mix it together. Traditional concrete isn’t that environmentally sustainable, so a few of the research projects that I’ve been working with have been to add waste materials to put into the concrete to reduce the carbon footprint. When I think of concrete that kind of piques my interest. I think about how we can make this material better, because we’re going to use it all the time because of its capabilities in construction. So how can we make this material better? Thankfully, I’ve been able to work on a few great projects that have been able to achieve that goal.

Describe some of your extra-curricular activities.

In my first year, I laid low because I took four years off after high school before joining my undergrad, so I was trying to get back into the school process. In my second year, I was exposed to the Engineering Society which is one of the larger engineering groups that we have on campus. I was nominated as the Second Year Representative. I helped host some events and then I was promoted to the Social Relations Representative and continued to host all the engineering events that we had on campus for that entire year. I stayed with them for another year and I was voted in as the Vice President and Financial Representative, where I took care of the entire budget of the Engineering Society. Those three positions that I held with the Engineering Society were incredible.  It was an amazing space to network and develop.  Joining the society was great as I made lots of friends and was able to attend a few conferences as well. After I left the Engineering Society, I joined the Concrete Toboggan Team because by then I had already done some work with concrete and I felt like it was my calling. I was voted in to be the Concrete Captain for that year alongside my research partner Dylan Kennedy, and so we came up with a concrete mix for the skis. The toboggan is designed by the superstructure team but the skis of the toboggan, the running surfaces that touch the snow, must be made of concrete. We designed the skis’ shape, the reinforcement, and the mix design and competed nationally. That year it was held in London, and we finished third overall. We also won the best concrete mix design so that was an incredible achievement for both Dylan and I. Those are the two clubs that I was part of on campus but there’s a whole world of other ones I wish I could have joined, but you have to pick and choose when you’re doing research plus school plus clubs it’s a lot of work. 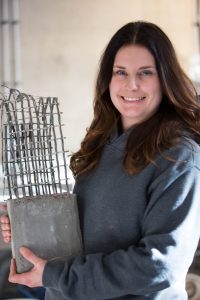 Why did you choose to pursue graduate studies (MASc)?

I wouldn’t say it was a very easy transition or an easy decision for me to make at first. It’s a very, very daunting task to do a large research project and then to write a thesis, and everything that comes along with it. I honestly thought there was no way that I could achieve something like that but Dr. Rteil has had a lot of faith, motivation and confidence in my ability to do work and he was the one who pushed me to try it initially. I said no at first, because I didn’t think it was for me, but after about six months or so I figured I would try. I was nervous and it was a big decision because you’re adding on a couple more years of school. I wanted to go to work but I thought; I love this school and I love the research that I do. I already had a project that I was working on during my undergrad that I could use in my thesis, it was a no brainer at the end of the day and I’m very happy that I chose to do a Master’s degree.

Where has research taken you?

Last June, I attended the 14th Conference on Fiber-Reinforced Polymer for Reinforced Concrete Structures in Belfast, Ireland. There were several presenters, all on the topic of fiber-reinforced polymers (concrete strengthening material), whereas my research is more focused on fabric-reinforced cementitious mortar. It is a similar material just uses a couple different components but is still a concrete repair material. It strengthens concrete by adding carbon fiber fabric on the outside of concrete members and is bonded with mortar. The goal is to achieve a stronger section. My research is focused specifically on the bond between this material and the existing concrete. I presented on the last day of the conference and I won the award for best student paper. That was an incredible experience, something I never imagined I could achieve, but I was able to come home with that award.

What’s next for you?

I currently work for a company called Mercury Consulting. It is a start-up structural design firm in town, so I’ve been working for them for six months now and I design buildings. I’m doing exactly what I wanted to as soon as I took that second-year course theory of structures. I love it so far, it’s a challenge of course, but I have a great mentor and I plan to work for this company for awhile. In the future, it would be great to stay with Mercury or find a company that has a research and development program. I would love to get my hands into one of those companies, because I can continue my research and do work at the same time; so a long term plan I would like to end up in a place like that.