Nilufar Islam (MASc, Civil ’11 & PhD, Civil’15) is a graduate of the University of British Columbia’s Okanagan campus School of Engineering and now a Project Engineer in Sewers and Drainage Design branch at the City of Vancouver.

What brought you to UBC Okanagan?

In 2007/2008, I was looking for a North American University to do my higher studies. I was just a fresh graduate from the top engineering university in Bangladesh named Bangladesh University of Engineering and Technology (BUET) and was working as a designer in a multi-national company named DaRam Engineering Inc. Being from a developing country, it was hard for me to apply to multiple universities with application fees. Fortunate enough, UBC was two of the top ranked universities in Canada who were offering zero application fees to prospective students from developing countries like Bangladesh. I came to know about UBC Okanagan from one of my classmates, Ahsan, who was also joining UBC Okanagan that Fall. Immediately, I contacted Dr. Deborah Roberts via email and she connected me to Dr. Rehan Sadiq. I remember I had a phone interview with Dr. Sadiq. I felt much comfort and was certain that I am going to work with the nicest supervisor. I remember I received my admission letter with research assistantship and was thrilled to explore a new country and research.

Describe the research you did at the School of Engineering.

In my MASc, I was working on evaluating source water protection strategies in surface water. And in my PhD I worked on optimization for booster chlorination for small to medium sized water distribution systems. Throughout my research life I developed nine decision-making tools for municipalities:

All of these decision-making tools improve drinking water quality. Focus of my PhD research was primarily small to medium sized water distribution networks that lack continuous monitoring, where chlorination is the predominant disinfection practice to maintain acceptable drinking water quality. New methods and strategies have been proposed to help in selecting location and dosages for booster chlorination, which protects against microbiological contamination and biofilm growth but also limit formation of harmful disinfectant by-products (DBPs), and chlorine related taste & odors issues.

Your name in Persian means Water Lily, have you always been interested in water and science?

I was always passionate about water that is true! For example, in masters I was focused on surface water issues, and in PhD I was focussed on water distribution network issues. Even in my current job,  I am designing sanitary and storm water systems.  I call myself  a water enthusiast as I was or am also involved with other water organizations such as Canadian Water Network (CWN), and the Canadian Water Resources Association (CWRA) to promote water related awareness.

Dr. Islam (Fourth from left) during her stay at UBC Okanagan- Organizing EGSS Events as a Chair

What made the Okanagan campus the right place to conduct this research?

When I was at UBC Okanagan I realized being able to conduct research in a smaller campus is ideal. My supervisor always made himself available, and I was able to work under his direct guidance. Another benefit was that not even my professor but other professors also incorporated their valuable comments at various stages of my research . I remember Dr. Deborah J. Roberts and Dr. Kasun Hewage always provided their valuable comments and constructive criticism, which ultimately helped me in improving my research. I was also involved with the City of Kelowna for a project with my supervisor Dr. Rehan Sadiq, where I was able to make some personal connection, which helped me in collecting data for my thesis. 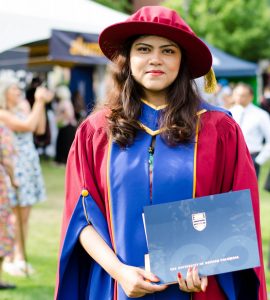 What did it mean to you to be recognized with an Alexander Graham Bell Canada Graduate Scholarship?

I was really happy when I received Alexander Graham Bell Canada Graduate Scholarship. It basically gave me the opportunity to fully concentrate on my studies as  I was getting $35000/yr which ultimately helped me in paying my tuition as well as my living expenses. This is also a great honor. To be honest it gave me the ultimate confidence that I was lacking in my graduate student life. After receiving the award, everything seemed easy for me  and I was improving and working on my fullest.

What are some of your fondest memories from being at UBCO?

In 2011, I received my first national recognition when received Philip H. Jones  Award for best presentation at the 26th Eastern Canadian Symposium of Water Quality Research. I received several awards as the best presenter at UBC Okanagan’s Engineering Symposium(in a row 2012, 2013, 2014). All of them was giving me confidence for future. I was also a graduate leader at that time. At first I was the internal coordinator and later the Chair for the Engineering Graduate Students Society (EGSS). I realized how we, students could take part in creating important decision for students. I remember creating the logo for EGSS, as well as the constitution & by-law. I received a letter on October 2013 from the Dr. Richard Klukas, Associate Director of Graduate Students and Research at that time praising my leadership skill and how it improved the morale in our graduate students. That was such a memorable day for me. I also made lifelong friends when I was organizing various events for Graduate Students. All these leadership roles at UBC Okanagan, made me interested in other roles such as later I became Vice- Chair for Canadian Water Network Student and Young Professional Committee (CWN SYPC), Co – Chair for Student and Young Professionals at Canadian Water Resources Association (CWRA), and Chair for Engineers and Geoscientists British Columbia Vancouver Branch (EGBC Vancouver Branch). All this happened because of the UBC Okanagan and the faculty, and of course my supervisor Dr. Sadiq, who always encouraged me to take new leadership roles.

How did your studies at UBC Okanagan prepare you for your current role?

One summer, Dr. Sadiq was writing a recommendation letter for me. And he asked me to add some leadership skills in my resume . He also emphasized how it can add in my confidence as well as my personality development. Later I joined in EGSS and other national associations. I was certainly enjoying all these experience and was noticing it is naturally developing confidence, networking skills, as well as leadership skills.  Then in 2016, I was in Edmonton looking for a municipal opportunity and got a call from the City of Vancouver. They had a phone interview and I was hired by the Sewer and Drainage Design Team to design sewer systems for the City of Vancouver. The hiring process was surprisingly quick and also that was my only interview. I believe this is because of my  leadership experience. Working for a municipality requires patience as well as natural  leadership skill which I believe they found because of my previous experience with various organizations as well as working in a diverse community like in UBC Okanagan. 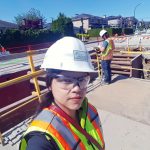 Dr. Islam during a site visit for the City of Vancouver at a project site in the Lower Mainland.

We are working toward the elimination of sewage overflows by 2050, which is also an environmental  goal for Province of BC.  This will replace combined sewer systems with separated sewer systems. This will ultimately separate the storm water from sanitary water and will do the following betterment in our environment:

What are your future ambitions?

Currently I am exploring my creative side in making movie  and documentary focused on environmental and social issues. I did take a few  part time courses on various aspects of film making from VanArt and from Langara College besides my hectic schedule of  my work life. Recently finished acting in a short film named “The Lantern”, where I am one of the principal protagonists . The short film is based on domestic violence and recently won an award in LA Short film festival 2018. I would like to fully explore this side of mine and develop something fruitful for my society. I also have a desire to go back to my home country Bangladesh one day and do something remarkable with all the experience I received in Canada. For example,  all the decision making tools that I developed can be somehow helpful in improving water quality in Bangladesh.