“UBCO has played an extremely important role in making me who I am today as a professional.”

What brought you to UBC Okanagan?

My supervisors were the main reason that drew me to UBCO, in addition to the high caliber of their research: I was very interested in the topic of research that was proposed by my supervisors during my first phone interview and I thought that it would be a good fit for my PhD studies. The project was highly interdisciplinary in a rapidly advancing field with enormous potential to improve the quality life of people, and it was important to me that my research would, in some way, improve peoples’ lives for the better.

In addition, each of my three supervisors (Drs. Mina Hoorfar, Homayoun Najjaran, and Jonathan Holzman) was a rising early star in their respective fields, and I believed that I would grow and learn exponentially under their complimenting expertise and mentorship (I was not disappointed!). Also, having worked in a large group during my MSc studies, I was really interested to join a smaller research laboratory for my Ph.D. studies – the one-on-one mentorship that comes with smaller research groups was a major draw for me.

Describe the research you did with Dr. Hoorfar?

What are some of your fondest memories from being at UBCO?

UBCO is a very special place for me, and I have many great memories. I played for the UBCO Heat Men’s Soccer Team for two years (2008-2010), and I also played beach volleyball with graduate and faculty members in the summer. The time that I spent with other graduate students is also very memorable. I am still in touch with many of those friends, and whenever we get a chance we talk about our memories as graduate students at UBCO.

Most memorably, the faculty and graduate student offices were in several portables where the medical school is now, and I remember there was this sense of community in that corner of the campus – all of the faculty, staff and the graduate students had a shared vision of building the School of Engineering up into a world class institution, and we were all working hard to reach this goal. As one of the first graduate students to arrive at UBCO, it has been a privilege to see the School grow over the years. Although I do have great memories of the School itself, one of my fondest memories is when I first met my wife at UBCO and the rest, as they say, is history.

How did your studies at UBC Okanagan prepare you for your role at UPEI?

In addition to all technical skill that I learned, my interactions with my supervisors formed my professional and supervisory style. Mina, Homayoun and Jonathan are among the most caring people that I have ever met, and they put their students as their highest priority. So, treating my students with respect and always being available to help them is something that I try to practice regularly. Another skill that I learned was that, as a faculty member, I should always have a vision for my research program that drives every project in the lab. Every grant that I apply, every partnership that I form, every project that I start, and every student that I accept must be serving that vision, and that is a skill that I developed by observing my PhD supervisors.

Finally, Spiro Yannacopoulos, the former dean of Applied Science, had a major influence on my career. As a mentor and role model, he gave me important advice during my gradate studies and later in my career. Spiro was a charismatic, honest, fair and caring leader, and he set an example for me. Overall, UBCO has played an extremely important role in making me who I am today as a professional. 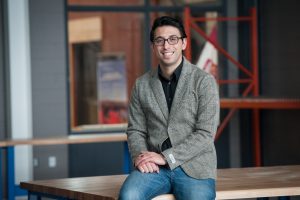 What type of research are you doing at UPEI?

Building upon my previous research experience, I currently work in two main areas: bioprinting and microfluidics. In the field of bioprinting, my focus is on the use of natural polymers such as amylum (from waste potato) and chitin (from lobster shells) for tissue engineering and drug delivery applications. With this work, I am hoping to add value to waste streams coming from the PEI potato and shellfish industries – two important resources in PEI’s economy.

Additionally, in the field of microfluidics, I am also working on the development of technologies for marine natural product development. Particularly, I work on addressing the problem of the “Great Plate Anomaly” by culturing uncultivable bacteria from marine origin using microfluidic systems – this work will help to discover and isolate new drugs or antibiotics that can improve the lives of many people.