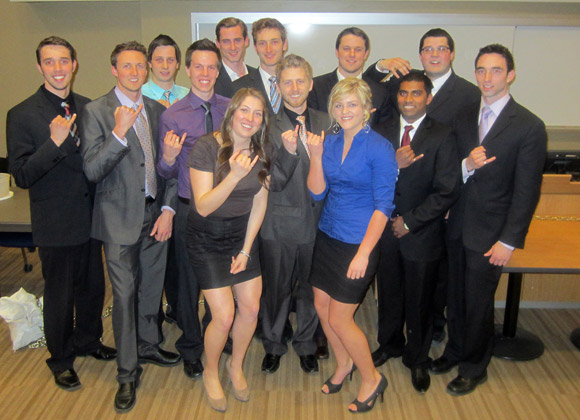 Engineering students proudly show their rings. For the first time, the iron ring ceremony was held at the Okanagan campus under their own camp.

First time ceremony held in Okanagan under its own camp

It is a lot more than just ornamental jewellery.

It is an honour and a tradition that dates back decades, and for the new engineers of the University of British Columbia’s Okanagan campus, the iron ring represents the culmination of many years of work.

The rings symbolize an accomplishment and acknowledgement not many have reached and for the first time the iron ring ceremony for engineers was held at UBC’s Okanagan campus under a newly formed B.C. Interior camp.

Professional engineer Tim Murphy, with EBA Engineering Consultants Ltd., is the Chief Warden of Camp 26, a group of seven local professional engineers that make up the regional administrative body overseeing the ceremony for the graduating engineers.

Being awarded camp status by the Corporation of the Seven Wardens, the national body that oversees the tradition, is no easy feat.  Regina was the last place to be awarded Camp 25 back in 1999.

“We had to go through a process that took about three years,” says Murphy.

In previous years, graduating engineers had to travel to Vancouver to receive their rings, but with the establishment of Camp 26, they can now be obligated on their own campus.

The idea of a ceremony for the Obligation of Canadian Engineers – when engineering students and Canadian engineers receive their rings – dates back to 1922, when seven past presidents of the Engineering Institute of Canada attended a meeting in Montreal with other engineers. Author and adventurer Rudyard Kipling responded to a call from the seven engineers with “The Ritual of the Calling of an Engineer” ceremony, to be administered by the Corporation of the Seven Wardens Inc.

It was instituted with the simple goal of directing newly qualified Canadian engineers toward a consciousness of their profession and its social significance, and indicating to more experienced engineers their responsibilities in welcoming and supporting the newer engineers when they are ready to enter the profession.